Our Master of Ceremony for the Awards Ceremony is : 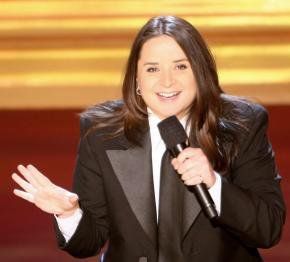 “Valls is as true to her ethnicity as she is to her sexuality; knocking TV audiences
on their behinds!” Curve Magazine Fasten your seat belts! Sandra Valls is a brash, high energy, fierce and funny, lesbian, Latina, comic and then some. Voted one
of Curve Magazine’s Top 10 funniest lesbian comics, and Top 10 faces to watch in 2010 by Diva Magazine she’ll make you laugh till your face hurts with her frank, no
holds barred, packed house comedy performances all over the country as one of
the world’s very few out Latina comics!

Sandra ignites the stage with a powerful and electric performance in Showtime’s hit comedy special, The Latin Divas of Comedy (nominated for an Alma Award). Her second Showtime comedy special, Pride: LGBT Comedy Slam! premiered earlier this year, hosted by Bruce Vilanch and featured Alec Mapa, Poppy Champlin, and Scott Kennedy. In fact, it’s still on Showtime onDemand! In a time
where gays and lesbians in the United States are still struggling and fighting for equality, Sandra Valls unapologetically takes the road less travelled, celebrates her sexuality and steps up to the front lines entertaining and educating folks through laughter and plenty of PRIDE!

Her other television credits include Outlaugh Festival, One Night Stand Up (LOGO), Comic’s Unleashed with Byron Allen (ABC), Habla !(HBO) and countless other spots including Mtv3. From hosting the GLAAD Media Awards to touring with the Latin Divas and Queer Queens of Qomedy to sharing the stage with Eva Longoria at the HBO Comedy Festival, Sandra still finds time to give back to the community by volunteering and producing comedy shows for various causes

including benefits/fundraisers for Aids, sobriety, domestic violence and LGBT rights. Always an activist of human rights, GLAAD has honored Sandra’s work at Mun2 with a Special Recognition Award for her groundbreaking achievements in production for promoting fair and accurate representation of the LGBT community in English-speaking Latino television. The California Senate presented Sandra with a Certificate of Recognition for her relentless support of people in recovery in the LGBT community as exemplified by her leadership in producing “One Gay at a Time”, a comedy show that celebrates people in recovery.

Sandra is also a published author fresh off the press in Out on the Edge: America’s Rebel Comics. A funny and illuminating piece about what it’s like to be a lesbian and a woman of color in the comedy world! www.welovesandra.com or Slvalls@msn.com