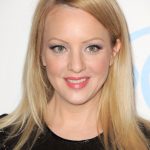 Wendi McLendon-Covey got her start at the world famous Groundling Theater in Los Angeles, where she excelled at improv and sketch comedy. Wendi is best known for her starring roles in BRIDESMAIDS, RENO 911, LOVESPRING INTERNATIONAL, and RULES OF ENGAGEMENT. Upcoming film and television appearances include CLAIRES CAMBODIA. CUBAN FURY, WHITE TRASH CHRISTMAS CAROL, MODERN FAMILY, and KINGS OF VAN NUYS. Her work in numerous independent films such as SPOONER, DOUCHEBAG, BOUTONNIERE, etc., has been seen in film festivals from Sundance to Cannes. In 2007 at the U.S. Comedy Arts Festival she was given a Film Discovery Award which was created specifically to commemorate her starring roles in two entirely improvised films: CLOSING ESCROW and COOK-OFF (which she also co-wrote). Producing credits include GILF (with 60 Frames), WAFFLE HUT (with Transition Entertainment) and COOK-OFF (with the Halcyon Company.)